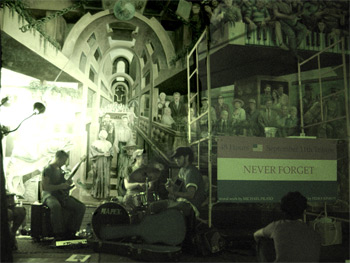 “Every year around September 11th, I paint for 48 hours straight. It is my personal way of honoring and thanking those we lost on September 11, 2001

– a thank you for their life and a search for the meaning of their death.While painting Inspiration I have found many answers to questions that sometime seem not to have answers, one of them being: “Everything happens for a reason”. Firstly, I think it should be said like this: “Everything happens for reasons.” – Because surely there is not just one.

When the Towers fell, the Pentagon burned, and Flight 93 heroically dove, I, like all good people of this nation and the world, felt sorrow that no words can express. But I did not feel the sorrow of sorrows – the sorrow of those who lost loved ones close to them.”

“The purpose of painting these 48 hours is to share my message that we should all work harder in life to promote LOVE. Love is my faith and my maker. Love is all those I meet while working on the mural Inspiration. Love is everybody in the world.” 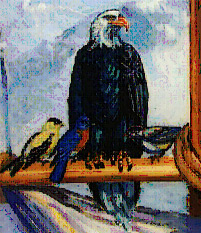 “On the night of September 11, 2001, after a day of watching the repeated televised events of the tragedy and after much contemplation about my role as an artist during such an historic catastrophe, I painted an eagle, goldfinch, bluebird, and a chickadee on the mast of the ship in the mural Inspiration in State College, PA. The eagle represents America, and the birds are the state birds from where each of the 9/11 planes took flight. My grandmother once said that when you die your soul is lifted closer to heaven by birds. That evening, my partner at the time, Yury Karabash, noted that we had not painted any middle-eastern flags on the mural – we had thought we painted flags from all regions of the world. So we started to paint the flags on the mural.Some of the college students in the area, not many but enough, started throwing stuff at us and shouting: “You are not an American!” I myself felt irritated but Yury, who just one year earlier had become an American citizen, felt fear and disgust. So I immediately painted a rip in the Italian flag, which is of my nationality, and continued to paint rips from every flag on the building except that of the United Nations. Then I painted an eagle inter-weaving the rips within the nest – The eagle ripped the flags and brought them back to make his home America. This was my way of symbolizing the fact that our country has taken in, and has tried to mend, the tired, poor and hungry from all over the globe. I also wanted a way of acknowledging that on 9/11 people of many nations were torn.When I finished this it was already 11:59 pm September 12, 2001. I then went home and just cried. I could not sleep. I stayed awake watching the news and sketching and soon it was another day. I spent that day with my family and then continued painting the mural again until the next night. Before I knew it I realized that I had been up for 48 hours.

For the days, months, and years following: I continued to paint and give tours of the mural to thousands of people. Over this time I realized my gift and my duty. People would cry, laugh, or just stare. But something beautiful was happening – I was able to share the love given to me throughout my life.

Since September 11, 2001 I have vowed to paint for 48 hours straight as a vigil honoring those who lost their lives and those who continue to work toward helping others in times of hardships. I also ask other artists to share their gift during this vigil with me. Please contact me if you would like to take part in this beautiful creation.” 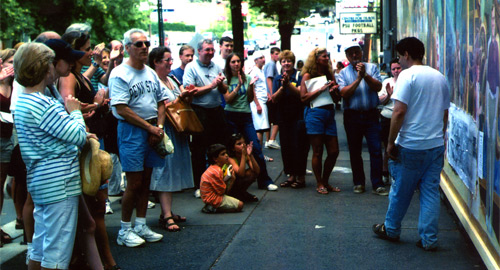