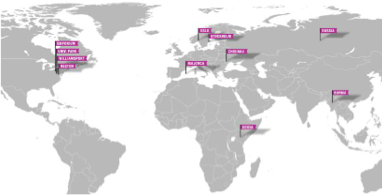 “We really took on something big with Inspiration: Lycoming County, the largest portrait mural in the world, but The World Mural is our most ambitious mural project ever conceived.”

Using the work on Inspiration in both State College and Williamsport as the starting point and first two links in a worldwide chain of murals. The end of each mural becomes the beginning another mural in another part of the world. What results is each local Inspiration mural linking that community to another community around the globe in one continuous mural; one international story shared by communities from very different places all over the world, spreading love, history, culture, healing, creativity, while transforming and beautifying communities.

Embracing and Incorporating Communities and Cultures

Similar in design to the twin Inspiration murals in State College and Williamsport, the World Mural would bear carefully rendered portraits of historical personalities, statesmen, writers, performers, people and anyone who has had an important impact on the community. After Michael continues the end of one mural as the start of another mural, the local artists from each location then take over to continue it with their own art, history, and culture, and complete the middle portion of the mural. After the middle section is completed, Michael oversees the completion of the final section to connect back with the starting point for the next mural.

The next proposed starting site for the third Inspiration mural, and one of the flagship cities behind the World Mural, is the city of Oslo, Norway. As home to one of the world’s greatest honors, the Nobel Prize, Norway will honor the women who have won the Nobel Peace Prize. It will feature painted portraits of the seven living recipients and retain the style of the Pennsylvania Inspiration murals. When completed, the three murals will stand in their separate locations as thirds of a whole; the entire work will be documented and visible in its entirety on the Internet.

(Use the scrollbar above to view the world mural sketch)

We’re looking for as much support as possible to help the World Mural reach communities all over the globe.  To contribute to this project please contact us or patronize our online store.  Thank You.